Ten Tips for Princes and Princesses 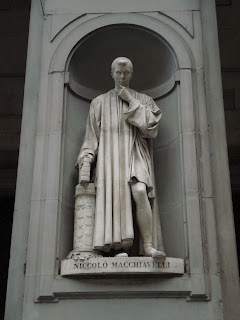 It's 500 years old now Machiavelli's great little book "The Prince", and it's frequently misinterpreted. But there is much to be learned by managers and employees. Here is a distillation for modern times.

1: The goal of leadership is to maintain it; not less, not more.

p. 40: "It is essential, therefore, for a Prince who desires to maintain his position, to have learned how to be other than good, and to use or not use his goodness as necessity requires."
p. 40: "He need never hesitate, however, to incur the reproach of those vices without which his authority can hardly be preserved; for if he well consider the whole matter, he will find that there may be a line of conduct having the appearance of virtue, to follow which would be his ruin, and there may be another course having the appearance of vice, by following which his safety and well-being are secured."
p. 61: "Prudence therefore consists in knowing how to distinguish degrees of disadvantage, and in accepting a less evil as a good."

2: Be informed, prepared, persistent, and patient.

p. 4: "For when you are on the spot, disorders are detected in their beginnings and remedies can be readily applied;"
p. 13: "But while it was their opportunities that made these men fortunate, it was their own merit that enabled them to recognize these opportunities and turn them to account, to the glory and prosperity of their country."
p. 46: "He must therefore keep his mind ready to shift as the winds and the tides of Fortune turn, and, as I have already said, he ought not to quit good courses if he can help it, but should know how to follow evil courses if he must."
p. 65: "[I]t is human nature when the sea is calm not to think of storms."
p. 66: "Nevertheless, that our free will be not wholly set aside, I think it may be the case that Fortune is the mistress of one half of our actions, and yet leaves the control of the other half, or a little less, to ourselves."
p. 67: "Moreover, I believe that he will prosper most whose mode of acting best adapts itself to the character of the times; and conversely that he will be unprosperous, with whose mode of acting the times do not accord."
p. 68: "And always, like a woman, [Fortune] favours the young, because they are less scrupulous and fiercer, and command her with greater audacity."

3: Foster good will or fear, but avoid being hated.

p. 2: "For however strong you may be in respect of your army, it is essential that in entering a new Province you should have the good will of its inhabitants."
p. 5: "And the usual course of things is that soon as a formidable stranger enters a Province, all the weaker powers side with him, moved thereto by the ill-will they bear towards him who has hitherto kept them in subjection."
p. 45: "Returning to the question of being loved or feared, I sum up by saying, that since his being loved depends on his subjects, while his being feared depends on himself, a wise Prince should build on what is his own, and not on what rests with others. Only, as I have said, he must do his utmost to escape hatred."
p. 48: "Not to be hated or despised by the body of his subjects, is one of the surest safeguards that a Prince can have against conspiracy."
p 51: "[F]or as Princes cannot escape being hated by some, they should, in the first place, endeavour not to be hated by a class; failing in which, they must do all they can to escape the hatred of that class which is the stronger."
p. 56: "But by disarming, you at once give offence, since you show your subjects that you distrust them, either as doubting their courage, or as doubting their fidelity, each of which imputations begets hatred against you."
p. 58: "[T]he Prince who is more afraid of his subjects than of strangers ought to build fortresses, while he who is more afraid of strangers than of his subjects, should leave them alone."

p. 46-47: "A Prince should therefore be very careful that nothing ever escapes his lips which is not replete with the five qualities above named, so that to see and hear him, one would think him the embodiment of mercy, good faith, integrity, humanity, and religion."
p. 47: "Every one sees what you seem, but few know what you are."
p. 47: "For the vulgars are always taken by appearances and by results, and the world is made up of the vulgar, the few only finding room when the many have no longer ground to stand on."
p. 47: "A Prince is despised when he is seen to be fickle, frivolous, effeminate, pusillanimous, or irresolute, against which defects he ought therefore most carefully to guard, striving so to bear himself that greatness, courage, wisdom, and strength may appear in all his actions.
p. 50: "[...] Princes should devolve on others those matters that entail responsibility, and reserve to themselves those that relate to grace and favour. And again I say that a Prince should esteem the great, but must not make himself odious to the people."

5: Follow what proved successful in the past or somewhere else.

p. 12: "[T]he wise man should always follow the roads that have been trodden by the great, and imitate those who have most excelled, so that if he cannot reach their perfection, he may at least acquire something of its savour."
p. 20: "Whoever, therefore, on entering a new Princedom, judges it necessary to rid himself of enemies, to conciliate friends, to prevail by force or fraud, to make himself feared yet not hated by his subjects, respected and obeyed by his soldiers, to crush those who can or ought to injure him, to introduce changes in the old order of things, to be at once severe and affable, magnanimous and liberal, to do away with a mutinous army and create a new one, to maintain relations with Kings and Princes on such a footing that they must see it for their interest to aid him, and dangerous to offend, can find no brighter example than in the actions of this Prince [Cesare Borgia]."
p. 39: "As to the mental training of which we have spoken, a Prince should read histories, and in these should note the actions of great men, observe how they conducted themselves in their wars, and examine the causes of their victories and defeats, so as to avoid the latter and imitate them in the former."

p. 7: "The wish to acquire is no doubt a natural and common sentiment, and when men attempt things within their power, they will always be praised rather than blamed. But when they persist in attempts that are beyond their power, mishaps and blame ensue."
p. 13: "And let it be noted that there is no more delicate matter to take in hand, nor more dangerous to conduct, nor more doubtful in its success, than to set up as a leader in the introduction of changes. For he who innovates will have for his enemies all those who are well off under the existing order of things, and only lukewarm supporters in those who might be better off under the new."

7: If a battle must be fought, fight it early rather than later.

p. 4: "And let it here be noted that men are either to be kindly treated, or utterly crushed, since they can revenge lighter injuries, but not graver. Wherefore the injury we do to a man should be of a sort to leave no fear of reprisal."
p. 8: "[Y]ou ought never to suffer your designs to be crossed in order to avoid war, since war is not so to be avoided, but is only deferred to your disadvantage."
p. 14: "Hence it comes that all armed Prophets have been victorious, and all unarmed Prophets have been destroyed."
p. 23: "Injuries, therefore, should be inflicted all at once, that their ill savour being less lasting may the less offend; whereas, benefits should be conferred little by little, that so they may be more fully relished."
p. 43: "A Prince should therefore disregard the reproach of being thought cruel where it enables him to keep his subjects united and obedient. For he who quells disorder by a very few signal examples will in the end be more merciful than he who from too great leniency permits things to take their course and so to result in rapine and bloodshed; for these hurt the whole state, whereas the severities of the Prince injure individuals only.
p. 43: "Nevertheless, the new Prince should not be too ready of belief, nor too easily set in motion; nor should he himself be the first to raise alarms; but should so temper prudence with kindliness that too great confidence in others shall not throw him off his guard, nor groundless distrust render him insupportable."

8: Always declare where you stand.

p. 60: "A Prince is likewise esteemed who is a stanch friend and a thorough foe, that is to say, who without reserve openly declares for one against another, this being always a more advantageous course than to stand neutral."
p. 60: "And it will always happen that he who is not your friend will invite you to neutrality, while he who is your friend will call on you to declare yourself openly in arms."

p. 62: "When you see a Minister thinking more of himself than of you, and in all his actions seeking his own ends, that man can never be a good Minister or one that you can trust. For he who has the charge of the state committed to him, ought not to think of himself, but only of his Prince, and should never bring to the notice of the latter what does not directly concern him.
p. 62: "On the other hand, to keep his Minster good, the Prince should be considerate of him, dignifying him, enriching him, binding him to himself by benefits, and sharing with him the honours as well as the burthens of the State, so that the abundant honours and wealth bestowed on him may divert him from seeking them at other hands."
p. 63: "For there is no way to guard against flattery but by letting it be seen that you take no offence in hearing the truth: but when every one is free to tell you the truth respect falls short. Wherefore a prudent Prince should follow the middle course, by choosing certain discreet men from among his subjects, and allowing them alone free leave to speak their minds on any matter on which he asks their opinion, and on none other. But he ought to ask their opinion on everything, and after hearing what they have to say should reflect and judge for himself."

10: Permit your staff autonomy, mastery, and purpose, but be careful.

p. 8: "[H]e who is the cause of another's greatness is himself undone[.]" p. 61: "Again, a Prince should show himself a patron of merit, and should honour those who excel in every art. He ought accordingly to encourage his subjects by enabling them to pursue their callings, whether mercantile, agricultural, or any other, in security, that that this man shall not be deterred from beautifying his possessions from the apprehension that they may be taken from him, or that other refrain from opening a trade through fear of taxes; and he should provide rewards for those who desire so to employ themselves, and for all who are disposed in any way to add to the greatness of his City or State."