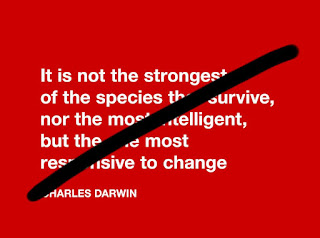 "It is not the strongest of the species that survive, nor the most intelligent, but the one most responsive to change."

Richard Branson posted the quote above on LinkedIn on 18 Feb 2015(1). It has literally received thousands of "likes" and hundreds of sympathetic comments. There was also a link to his website(2), which revealed his top 10 quotes on change. Apparently, the above is his favourite.

Let's look at it.

THE FIRST THING that should be noted is that Darwin actually never said or wrote this. Given that it takes less than a minute to find out(3), I am surprised that neither Branson nor his people cared enough to check the quote's provenance. Just because something seems plausible, doesn't mean it is true. Just because somebody possibly said something, doesn't mean he or she actually did.

SECOND, in what way are companies similar to species in the natural world? And where do the similarities break down? If book stores are selling coffee, are they still book stores? If Apple starts building cars, is it still Apple? If dinosaurs grow feathers, we call them birds.

Companies clearly fulfil these requirements, even though correlation between parents and offspring is often achieved not through genes but through the copying of "best practices" or the poaching of successful executives.

What is important here is that natural selection can only work on the raw material that is present. Furthermore, natural selection must abide by constraints. That's why we don't see chess-playing mice or flying tigers -- although both would be splendid.

LAST, what does it mean to be "most responsive to change"? Is it a variation of the tired old adage: It's survival of the fittest out there, and the fittest can easily be identified as being the ones that survive.

But don't we always credit success and failure to competence and lack thereof, never to luck, or circumstance, or history. Don't the winners always look methodical, flexible, and decisive and the losers confused, rigid, and hesitant?

Maybe the apocryphal Darwin quote should be followed up with an apocryphal Einstein quote(4): "Everything should be made as simple as possible, but no simpler."