The fish that were there (but didn't exist) 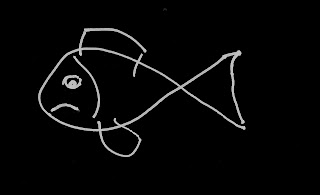 In 2001 and 2002 I was a postdoctoral fellow with AquaNet, one of the Networks of Centres of Excellence. AquaNet sponsored "39 research projects devoted to improving the country's aquaculture industry"(1). It's Board of Directors consisted of partners from academia, government, and industry.

For us at the University of British Columbia the question was this: When Atlantic salmon escape from B.C. fish farms, what are the chances that they establish viable populations on the Pacific coast? This question can be broken down into chances of breeding success, of juvenile survival, and of adult survival. I explored the question whether juvenile Pacific salmon and juvenile Atlantic salmon show different susceptibilities to predators.

For my experiments I had to simulated a small creek in the laboratory. I set up three experimental arenas, large oval channels filled with water about 60 cm deep, pebbles and rocks of various sizes on the bottom. In April I stocked each tank with 20 juvenile Pacific salmon and 20 juvenile Atlantic salmon, all about 30 mm long. I also stocked two of the tanks with two predators each, two adult steelhead trout of about 50 cm.

Twice a week I went into the lab, fished out all the juveniles from the experimental arenas, weighed them, measured their length, put them back, and restocked those juveniles that had been eaten by the steelheads, or gone missing otherwise.

The experiments did not go well. Yes, steelheads ate juvenile Atlantics slightly more frequently than Pacifics, but they didn't eat them frequently enough to infer a statistically significant difference(2).

In early July I abandoned the experiments. I left the experimental arenas intact, however, and informed the laboratory staff to feel free and help themselves to the steelheads for their summer barbeques.

When I returned in early October(3) to clear the arenas I was surprised to see that in one arena eleven juvenile salmon had survived and grown in length to about 12 to 14 cm. Nine of them were Pacifics, two were Atlantics.

That's when it struck me.

I immediately made my way to the principal investigator. He also directed experiments investigating spawning ground competition and food competition. The Pacifics had always won against the Atlantics.

The principal investigator looked at me for a while and then leaned forward at his desk.

"Michael," he said without menace. "We will have an AquaNet progress meeting before Christmas. Some of the directors will be there. What you have to understand is that nobody in AquaNet wants to hear any ideas that could shed a bad light on the aquaculture industry(4). Do you understand?"

You see, the purpose of Science is the pursuit of truth, not to serve political expediency. Yes, there are philosophical problems. Yes, we do have battles between schools of thought. Yes, causation is difficult to prove, and truth is always only provisional. But if you can't trust a scientist, who can you trust?

I went back to the lab that afternoon to dispose of the evidence. I sat down for a while and watched the two Atlantics swim around the pool. The denial of their existence had made me oddly fond of them.

I killed them with a bleeding heart.

(1) AquaNet ran from 1999 to 2006. It is interesting that although at the time AquaNet was quite a prestigious project, some fifteen years later it is hard to find any detailed information about it: http://www.nce-rce.gc.ca/Index_eng.asp (Accessed: 30 Mar 2017), http://www.nce-rce.gc.ca/_docs/reports/annual-annuel/Annual_Report_02-03_Rapport_Annuel-e.pdf (Accessed: 30 Mar 2017)
(2) Each adult steelhead trout ate one or two juvenile salmon per week. Before we decided on steelheads as a predator, we conducted preliminary experiments with cormorants. They were too efficient. It took four of them less than ten seconds to clear twenty juvenile Pacifics from a large holding tank.
(3) After the 9/11 attacks the cleaning of fish tanks was not a priority.
(4) To my knowledge there is no evidence that suggests the establishment of a viable Atlantic salmon population on the Pacific coast. But that does not mean that one day life will not find a way.

In the meantime I have spoken to John Volpe from the University of Victoria(1). John is a specialist in Invasion Ecology. He and I first met during my time with AquaNet.

John told me that about a decade ago he had evidence "of multiple year classes of wild-reared Atlantics in multiple Van Island rivers. They were competitively equal to or superior to native juvenile salmonids and in some instances very numerous. Adults were prevalent in dozens of rivers."

He also told me that no work has been done since, and nobody really knows what the status quo is.

On the other hand a 2006 Fraser Institute publication, Fraser Alert, states: "Overall, the risk of escaped salmon detrimentally affecting wild stocks in BC is currently low."(2)

Now the question is this: Who do you trust?(3)

(1) http://www.johnvolpe.ca/ (Accessed: 6 Apr 2017)
(2) https://www.fraserinstitute.org/sites/default/files/Escaped_Farmed_Salmon.pdf (Accessed: 6 Apr 2017). The Fraser Institute is a conservative "think tank". Fraser Alert is not a peer-reviewed publication. This paper was penned by a group of scientists from the University of British Columbia, the Norwegian Institute for Nature Research, and the University of Glasgow. One of the authors, Scott McKinley, was the Executive Scientific Director of AquaNet.
(3) The existence of viable Atlantic salmon populations on the Pacific coast is not a trivial matter, both ecologically and economically. It is curious that in a whole decade no work should have been done on this problem. Why would that be?