On wealth, and chance, and power

In a recent article philosopher Matthew Stewart examined the distribution of wealth in the United States, its causes and its consequences(1). His premise is that there are three distinct classes in U.S. society: The top 0.1 percent of the population -- the ultra-rich of old money, new money, and tech money --, the bottom 90 percent, and, in between, the 9.9 percent.

Because the 9.9 percent hold substantially more wealth than the top 0.1 percent and the bottom 90 percent combined (Figure 1), Stewart argues that it is this class that is instrumental in the establishment, maintenance, and growth of inequality in both capital and income. 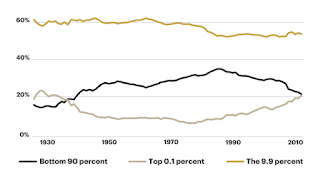 Figure 1: A tale of three classes. The 9.9 percent hold most of the wealth in the United States. Source: https://www.theatlantic.com/magazine/archive/2018/06/the-birth-of-a-new-american-aristocracy/559130/

So who are the 9.9 percent? It is the class that through their wealth has access to better education, better information, better jobs, stronger professional organizations, better food, better clothes, better health care, better lawyers, lower interest rates, better credit cards, better homes, better neighbourhoods, and safer cars. You know, bankers, businessmen, doctors, senior civil servants, lawyers, and, to a certain extent, YOU AND ME.

What is worst about us is that we are convinced that our (relative) success has been earned, not through privilege, but through talent, and knowledge, and hard work. And we don't take it lightly if the fairness of our meritocracy is questioned.

So let's question it, with a simple model.

Imagine a world where wealth units are dispensed by random draw of citizen names from a hat. In this world success has nothing to do with talent, and knowledge, and hard work; luck is all that counts(2).

I would argue that the succession from a fair distribution of wealth in society to an unjust one is only natural. We can imagine a world initially operating under the first scenario, i.e. the equal distribution of wealth. This world is at an unstable equilibrium, i.e. any accidental deviation from an equal distribution (e.g. through inheritance, gifts) will lead to a larger deviation. The wealthier individuals may argue that it is only fair that in a random draw their tickets be placed back in the hat(4). They may further argue that wealthier individuals should additionally be rewarded for past successes, thus further increasing their chance to win.

I could talk about the function of government here(6), but that is not the point I want to make. Instead another thought:

Imagine power, not wealth, is distributed by random draw. Yes, there is a correlation between wealth and power, but power in man always means the power to make decisions that will affect other people and does not necessarily hold wealth as a prerequisite.

Now think of the institutions of modern society: Our governments; our political parties and religions; our courts and justice systems; mass media and social media; financial institutions, industry, and businesses; labour unions and professional organizations; schools and universities; the Arts and the Sciences; health care and medicine; the military and sports federations; ....

What if ... What if the institutions of modern society are led not by women and men whose merit has propelled them to the top, but instead by people who rose there by chance. Not by women and men who reached the decision making level through talent, and knowledge, and hard work, but by people who arrived there by initial luck followed by the manipulation of the rules(7).

That doesn't mean that every leader is an idiot, or a crook, or a flip-flopper. But, a look at the daily news does suggest that the random draw model of power may not always be far off(8).

(1) https://www.theatlantic.com/magazine/archive/2018/06/the-birth-of-a-new-american-aristocracy/559130/ (Accessed: 14 Jun 2018)
(2) Success = Competence + Luck; Competence = 0: See also: https://www.linkedin.com/pulse/success-competence-luck-michael-baumann/ (Accessed: 14 Jun 2018)
(3) One measure of the validity of a model lies in the deviation between model outcomes and real-world data. Even under the third scenario the top 10 percent own only 42% of the wealth, while in the real world they own 80%.
(4) Note that wealthier individuals have more time and more money to pursue goals that are in their interests or the interest of their class. True, they also have more time and money to help the disadvantaged. But how time and money are spent are moral choices, and charity is an unstable state.
(5) This is the iron law of oligarchy, which posits that every democratic institution will eventually become an oligarchy (or worse, a kakistocracy).
(6) The function of government is to protect all citizens from the extreme contingencies of life. Democracy is the institution that has evolved to prevent escalations of inequality. Democracy is not perfect but has established safeguards (e.g. the separation of executive, legislative, and judicial branches of government; the attempt at separation of economic power and political power). And so on.
(7) Indoctrinations like: "The best predictor of future success is past success."
(8) Carl Sagan (1996), in his book The Demon Haunted World, tells the story of Italian Physicist Enrico Fermi talking to U.S. flag officers during World War Two. It goes something like this:

So-and-so is a great general, Fermi is told. "What is the definition of a great general?" Fermi asks. "I guess it's a general who has won many consecutive battles." the officer answers. "How many?" Fermi asks. After some discussion, the flag officers settle on five. "What fraction of American generals are great?" Fermi then asks. After some more discussion, the flag officers settle on a few percent.