On pulling my socks up -- A letter to Ms. Gadsby 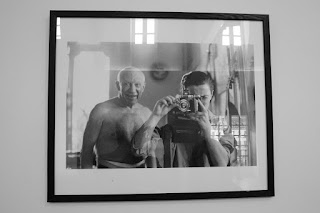 I recently watched a very moving piece by stand-up comédienne Hannah Gadsby(1). In it Ms. Gadsby tells the story of her life and makes some excellent observations, including this: "[T]ension is what not-normals carry inside of them ALL of the time. Because it is dangerous to be different."

She then concludes: "To the men ... To the men in the room, I speak to you now. Particularly the white men, especially the straight white men ... PULL YOUR FUCKING SOCKS UP!! ... How humiliating. ... Fashion advice from a lesbian. That is your last joke."

The first question that came to mind was: How did I deserve this??(2)

I am with you, Ms. Gadsby, all the way, but then I get thrown into the class of "straight white man" -- the same class as Donald Trump, and Benito Mussolini, and possibly Tom Cruise. On the outside we may all look the same, but on the inside, you know, there is variability.

To be sure, I come from a country where failure to speak up for fellow citizens has led to unspeakable tragedy. Consequently, early in my life I decided that whenever I run into injustice, corruption, stupidity, or mere indifference, I shall speak up. And so I did, and so I do(3).

What difference have I made?

Absolutely none, Ms. Gadsby. Except that in my life I have been punished more often and more harshly for speaking up than the despots, and crooks, and blockheads I have criticized(4). But that is all right, because along the way I have learned a few things.

For one, within the human species unjustness, corruption, and stupidity seem to be distributed quite independently and with no regard for sex, colour, or sexual orientation(5). For another, good ideas and noble thoughts are not a prerogative of minorities, visible or not. And for another, making this world a better, a more civil place cannot be an obligation for straight white men only.

That said, it is true, the world is a nasty place, and straight white men are running much of it. But they are in a minority to all those straight white men that are NOT running the world. Consequently, I believe that not sex is our greatest divider, nor colour, nor sexual orientation. Our greatest divider is power, and the ideas and actions required to get it and keep it.

In the end I believe you are right, Ms. Gadsby.

We may be just a year away from a time when 165 million women will lose their right to choose whether or not to have an abortion. The decision on this right will be made by nine people, mostly men. And it will be orchestrated by one man who is orange. If anybody thinks that the erosion of women's rights is a problem only "of the people, by the people, for the people" of the United States, think again.

It truly is time for all of us to "pull our fucking socks up".

(1) Hannah Gadsby (2018), Nanette (Netflix Original).
(2) The second question was: Am I really that thin-skinned? Consider that I like to taunt vegetarians by pointing out that Hitler too was a vegetarian.
(3) In my professional life I have tried to expose the injustice in the academic hiring process, the corruption in the practice of science, and follies of our education system. Examples? Michael Baumann (1996), https://www.nature.com/articles/381108a0.pdf (Accessed: 26 Jul 2018); Michael Baumann (2000), Science as a churning device. Vancouver Sun 18 Oct 2000: A19; Michael Baumann (2003) Open letter to the president of the University of British Columbia. 15 Jan 2003; Michael Baumann (2007), Why education has lost its mind. Vancouver Sun 13 Sep 2007; Michael Baumann (2017), http://citizenbaumann.blogspot.com/2017/08/university-presidency-draft-manifesto.html (Accessed: 26 Jul 2018); Michael Baumann (2017), https://www.universityaffairs.ca/opinion/in-my-opinion/need-seriously-rethink-concept-final-exams/ (Accessed: 26 Jul 2018).
(4) No doubt I have made my fair share of poor judgements along the way, some accidental, some circumstantial, and some by choice. And I am not complaining; you just cannot challenge an old battleship to a fist fight and expect to survive without a severe beating.
(5) Complacency and cowardice may be overrepresented in the "straight white men" class but that may be a sampling error on my side. Note however that most of "us" do not protest when called to pay for the crimes and misdemeanours of our classmates.