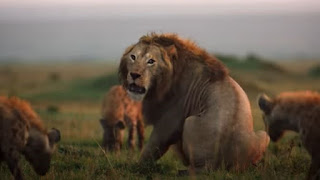 I am a zoologist by training, and as such my expertise lies in animal behaviour and system dynamics. I know little about the psychology of leadership, except for a couple of decades of informal observation. That's why two weeks ago I asked this question on LinkedIn:

Given that LinkedIn is so rich in leadership wisdoms -- some good, many trite -- tell me, why is the world so poor in good leaders?

The results are disappointing. In spite of 175 or so views, few tried to answer my question. But then many employees are LinkedIn with their bosses and may therefore be reluctant to attract attention to themselves(1).

In any case, I myself must give the question a shot.

PROPOSITION #1: I AM WRONG.
This is the null hypothesis, if you will, and it is always a possibility: There is nothing interesting going on, the world is in fact not poor but rich in good leaders. And it is just I who wouldn't recognize good leadership if it hit me in the face.

But why then would the world be so rich in leadership advice(2)? If good leadership is a ubiquitous phenomenon, why are people spending time writing books, developing courses, or designing websites about it. We usually don't spend intellectual effort on things that are trivial(3).

That said, one human's dream is another human's nightmare.

PROPOSITION #2: BAD LEADERS DON'T LEARN.
I have yet to meet the bad leader who doesn't think she/he is a good leader. And if you think you are good at something, you wouldn't pick up a book or take a course to teach you the basics. There are two forces at play, both revealed in a study by Kruger and Dunning in 1999(4).

First: "[T]hose with limited knowledge in a domain suffer a dual burden: Not only do they reach mistaken conclusions and make regrettable errors, but their incompetence robs them of the ability to realize it."

Second: "[O]ne would have thought negative feedback would have been inevitable at some point in their academic career. So why had they not learned? One reason is that people seldom receive negative feedback about their skills and abilities from others in everyday life[.]"

Promotion may lead to the delusion of infallibility. True information rarely makes it up the chain of command. How many people do you know who told their bosses that they are morons, or monsters, or marionettes?

PROPOSITION #3: GOOD LEADERSHIP IS HARD.
What is good leadership, anyway? My incomplete list is this, but make your own:

Nobody is perfect, and that is all right. It takes talent, and education, and experience to get better at leadership. None of this matters, however, if your behaviour is not genuine.

And one thing is certain: If your natural inclination is to be selfish or lazy, to lie and to hide things, to be nasty or disinterested, leadership is not for you.

PROPOSITION #4: LEADERSHIP -- NATURE RED IN TOOTH AND CLAW.
The question is this: How do so many bad leaders reach and maintain their positions?

I will leave it to you to explore which character traits and professional skills lead to promotion at your organization -- competence/sycophancy, humility/arrogance, honesty/pretence/scheming, realism/unbridled optimism, et cetera.

Does that mean that we may be condemned to suffer bad leaders(8). I am not sure. Whether they like it or not, leaders usually feel obliged to agree that leaders should be held to the highest standards.

Let's start holding our leaders to the highest standards. Accountability should scare at least the worst people.

NOTES AND REFERENCES
(1) I believe it is fair to say that in the history of humankind people were usually shot for the questions they asked, not for the answers they gave. Still, silence is golden.
(2) As of 17 Jan 2019, amazon.com lists over 60,000 books for "leadership", there are an unbelievable 23,853 groups on LinkedIn that contain the word "leadership", and a Google search on "good leadership" returned "[a]bout 4,560,000 results".
(3) One should never underestimate the capacity of universities to develop programs in about anything. As Robert A. Heinlein has his protagonist say in his 1961 novel: "But when they began handing out doctorates in comparative folk dancing and advanced flyfishing, I became too stinkin' proud to use the title. I won't touch watered whiskey and take no pride in watered down degrees." 1961, Ladies and Gentlemen, 1961.
(4) Justin Kruger and David Dunning (1999), Unskilled and Unaware of It: How Difficulties in Recognizing One's Own Incompetence Lead to Inflated Self-Assessments. Journal of Personality and Social Psychology 77(6): 1121 - 1134
(5) "Ethical leadership … is about building workplaces where standards are high and fear is low." James Comey (2018), A Higher Loyalty: xi
(6) "But what we need is that the only men to get power should be men who do not love it[.]" Plato (ca. 375 B.C.E.), The Republic: The Simile of the Cave: 521b
(7) It is the privilege of leaders to hire their subordinates. But we can also imagine a world where the workforce elects their leader. In fact, that is what we are doing in representative democracies.
(8) Is it better to have a bad leader or none at all? With the emergence of new hierarchies where everybody is a leader and few do the actual work, something to think about.